For most people, as the weather takes a turn and temperatures plummet, curling up under a duvet on the couch with a hot cuppa seems to make the most sense but for sled dog teams it’s time to hit the snow!

Although late Autumn signals the time of year when many of us want to stay inside and hibernate until spring, for others, it signals the start of a busy action-packed season in areas of the world. For sled dogs and the people who work with them, it’s the beginning of a very active and in some cases grueling season as ice gathers and snow is forecast.

History of the Sled Dog

Being able to withstand the cold temperatures required to make the long trek across the open wilderness, working sled dogs played an important role in the settling of the Alaskan frontier.

In the US Bureau of Land Management cities, pioneering settlers used vehicles similar to kayaks fitted with ski-like runners underneath to be pulled by a team of these amazing work dogs, helping to transport goods and people across the remote wilderness.

Back in the day, these dogs were much larger than the more sleek and sinewy counterparts of today. Similar hounds are bred more for pets and competitive racing rather than hauling heavy loads.
There’s no doubt that they performed a major role and are an important part in the pioneering history of Alaska and the Yukon’s Territorial settlements. Even if they don’t perform quite the same actions today that their ancestors did, today’s breed of sled dogs still displays their magnificent beauty agility and power, instinctively performing a job that they love to do.

An enormous amount of trust and patience goes into bonding and building partnerships with sled dogs. A very special relationship develops between a Musher and his or her dog sled team which, is one that’s built on mutual trust, understanding, and respect.

You have to experience these dogs at work for yourself to appreciate their loyalty and their amazing qualities.

As well as their stature, weight, and quality of their fur, sled dogs have to be mentally and physically well rounded. Experience teaches Mushers to have a keen eye when it comes to selecting a new team member. This dog’s relationship with his or her potential ‘teammates’ is also a critical component. Dogs on sled teams are without question amongst the fittest athletes being lean and muscular and with the healthiest eating regimens.

As there is no limit to how many dogs can pull a sled, a musher, depending on his or her task, may have anywhere from two to three dogs for smaller jobs like transporting supplies and anything between to twelve or sixteen pups for the long haul and heavy transportation. A sled dog relies on his thick undercoat for warmth and protection in cold climates, he also wears booties to protect his sensitive paws against shards of ice and the relentless friction that sled pulling bears.

Today, running races such as the famous long-distance Iditarod, which takes place in Alaska every year, or the 1000 mile Yukon Quest requires each dog undergo a thorough medical examination to ensure he can safely work. This grueling International Sled Dog Race took its name from the “Highway of The North” which is the famous Yukon river and one of the historical land routes traveled by prospectors, adventurers as well as mail and supply carriers who traveled between the gold fields of the Klondike and in the Alaskan interior.

Historically, the trail would trace the routes that the prospectors followed to reach the Klondike during the 1898 Gold Rush and from there to the Alaskan interior for subsequent gold rushes in the early years of the 1900s.

When you see these powerful dogs hard at work it’s head down and full speed ahead across the glistening snow-covered plains of Alaska flanked with tall evergreen trees. You realise they are doing what they love – you can literally feel it!

You also know that these sled dogs are following their instincts to pull heavy loads over long distances. Starting their training as puppies and developing simple skills, by the time they’re youngsters they will be able to run with the more mature dogs to develop their social skills and learn commands from their musher.

What is a Musher and what do they do?

Derived from the French word marche, which translates as march, the word “mush” is the term given to the person who controls the dog sled team.

Sometimes these mushers can be seen running alongside their dogs at various points during a sled race and this is often when there’s another musher on hand to command the sled team.

According to sources like National Geographic, the most popular sled dog breed is the Alaskan husky known as a “mutt” breed especially renowned for its strength and stamina. This is contrary to the general belief that the Siberian husky or Alaskan malamute also common breeds associated with sledding. These powerful sled dogs weigh between thirty-five to sixty pounds, and they can pull twice their body weight or more. Mushers choose their dogs carefully as they have to be integrated into an existing team.

Other members of the Team

Each team of sled dogs is divided into rows which are defined by their different tasks. The dogs are harnessed together in two parallel rows, the lead dog on the front setting the pace for the rest of the team. Every dog is identified by his position in the row and assumes an important role in the overall team.

The lead dog has been hand-picked for its keen sense of smell and superior intelligence as he spearheads the rest of the team. The swing dogs are behind him. They guide the team through turns and help to steer the team dogs, these are the dogs that make up the largest part of the pack and are positioned in the center because of their power and strength.

The heel dogs are positioned directly in front of the musher and these dogs are the strongest of the pack as well as the calmest in stressful situations. The heel dogs are also the smoothest runners and tend not to tip over the sled on tight turns.

At the two million acre Denali National Park & Reserve in Alaska, a kennel of around 40 dogs help protect and manage the park’s two million acres of protected wilderness. Vehicles have been banned from this area

These incredible dogs form a team that transport staffers into remote areas of wilderness that can’t be accessed by motorised vehicles, to deliver supplies besides performing other tasks.

These sled dogs are really well cared for and live in state-of-the-art kennels which allow visitors. So, if you find yourself traveling to North Alaska, make sure you find time to drop in and give them a visit. 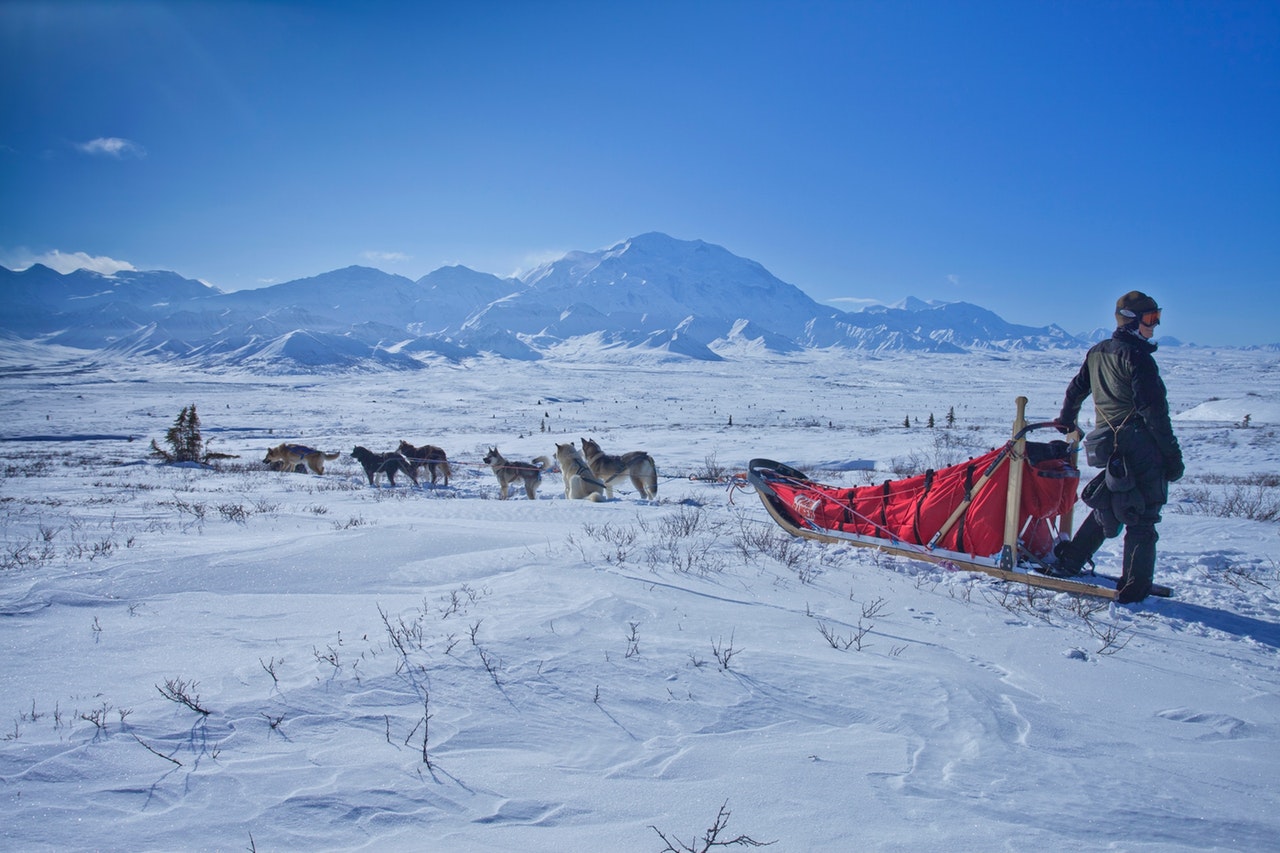